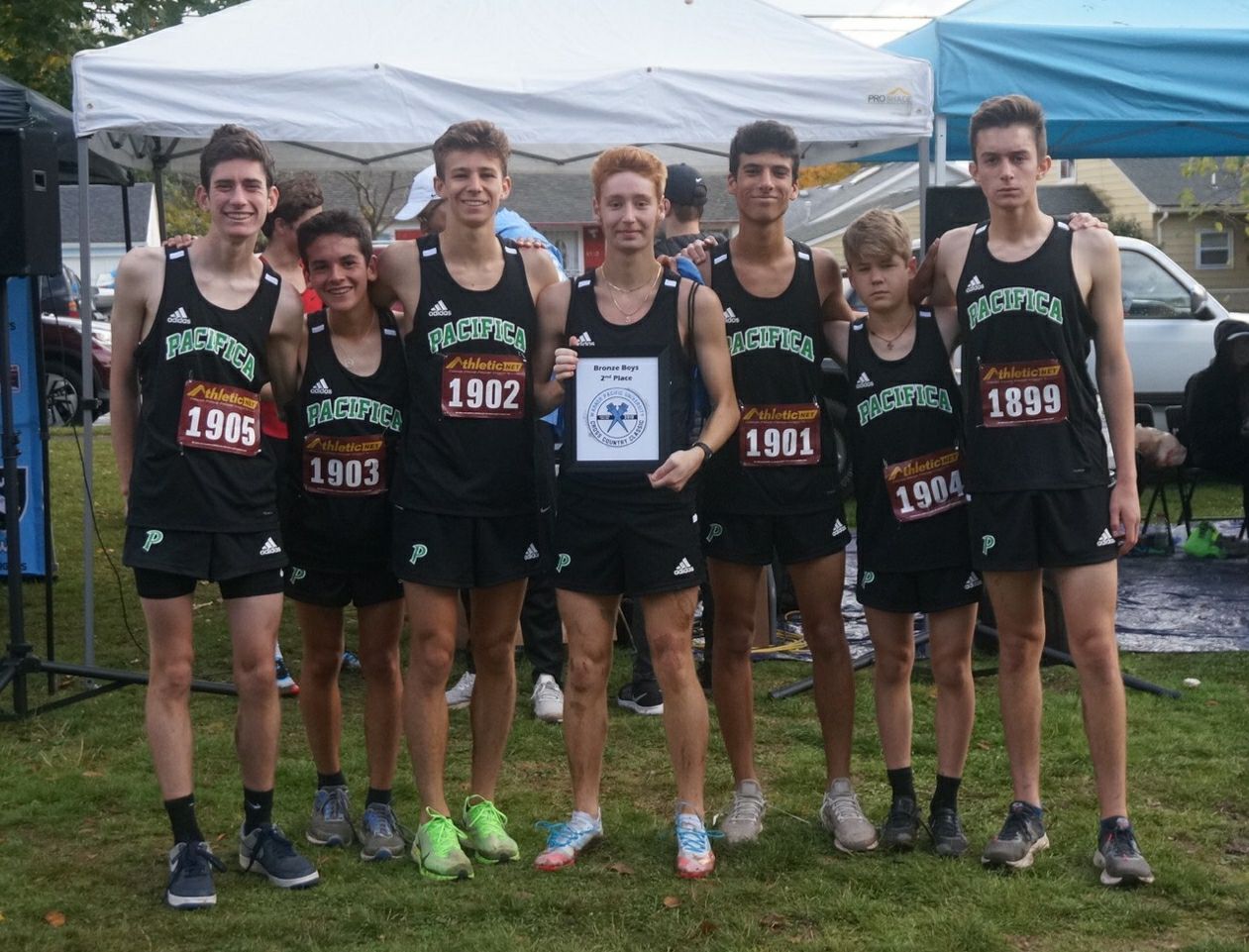 This past weekend the Pacifica Cross Country team took the boys and girls varsity squads to Portland Oregon, where they each competed in the Warner Pacific Cross Country Tournament.
Over 25 teams competed in the invitational from
California, Oregon, Washington, Idaho, and Alaska. The Pacifica boys are coming home with some major hard ware, as they took 2nd place overall. Jack Klines led the way taking 6th, followed by Ben Reasner in 9th on a wet and muddy course that saw Junior Joe Flanigan lose a shoe halfway through. He finished with one shoe and still scored as the #5 runner.
See an album of their weekend, including a jog on the track at Nike headquarters here on the Seawolf Athletics Facebook page.
Such accolades are not uncommon for this incredibly uncommon group of varsity boys runners. Already ending last season as the most successful Pacifica boys team ever at the California Division 5 CIF Finals, this year's team is currently ranked #7 in the state, and #2 in their own Southern Section stretching from LA to San Diego county.
What is often misunderstood about California's Division 5 classification is that it is not only full of Division I talent, but is also- by far- the largest field of schools in the state.  Pacifica (at 240+ students) competes year after year against schools twice its size, with as many as 200 schools in Division 5 with populations up to 600; by contrast, only 48 schools compete in Division I across the entire state.
In running, it all comes down to the times of the top five runners, and this year's Pacifica team is stacked and deep. Led by seniors Ben and Jack , juniors Noah Pakianathan and Flanigan, sophomores Jude Williams and Scott Yontez, and freshman phenom Ian Warfield, the team will compete this Friday in the nationally renown Mt. Sac Invitational looking to take home the top prize. These Seawolves have a chance at competing in the state tournament for the first time in Pacifica history, and Mt. Sac will be a huge measure of their fortitude and position.
All this would not be possible without the now-legendary leadership and commitment from coach Brandon Shaw, who is no stranger to Pacifica titles in Cross Country and Track. Coach Shaw has already taken two girls teams to the State Finals, and has developed the overall program into one of the most consistent and popular teams in Southern California.
Follow this team, as well as the incredibly competitive JV squad and Varsity girls over the next month on your MyPacifica calendar. CIF Prelims and Finals will be held mid November, with the State Finals in Fresno taking place the weekend after Thanksgiving.
Good luck boys, and GO SEAWOLVES!
Back